Video Game Testing: All in One

Gamers are an extremely demanding audience. They become ardent supporters of things that managed to impress them as easily as leave reputation killer reviews on every possible social platform.

This is where Game QA takes the stage.

We, at QATestLab, take games really seriously and urge game developers to do so as well. For this purpose, we have put together an all-in-one game testing cheat sheet with algorithms, testing techniques, and common defects. Let’s not forget that quality does not come easy but is definitely worthy of the effort.

How to become a video game tester?

It sounds like a dream job, but a successful bug hunt takes much more than merely playing the game. There are team leads, requirements, and deadlines to meet. Moreover, it requires competency, experience, and proficiency in writing algorithms, so you can detect in-game defects and clearly define the steps to reproduce them.

The mission of a game tester is to find bugs as early as possible and make sure they get fixed. These defects, or bugs, can be detected in any game area, such as gameplay, graphics, sound, etc. Game QA engineers also need to test the limitations of the product. In simple words, we try to break the game, so developers strengthen all the weak spots.

There are many ways true game aficionados can prepare themselves for a career in game testing. The perfect option would be getting a degree in game design or related fields. Apart from that, one can start by writing game reviews, applying for a volunteer game testing opportunities, or beta testing the software yet to be released.

How do you find bugs in video games?

What are the most common bugs in video games?

How do you report the game bug?

Bug reporting is the primary way to inform the developers about the bug that was detected during the testing process. It should involve a high level of detail regarding the ways to reproduce the bug, test evidence, and associated technical risks. The perfect report is explicit, compact, and unique.

The structure of the bug report usually includes the following: 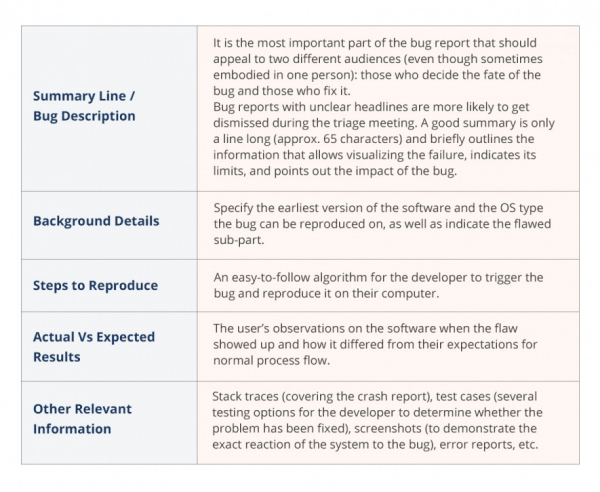 This is just a brief outline of the things a game QA engineer should know. To find more information on this topic, check out our free video game testing guide, available online that contains our top insights for game QA engineers.

Read the guide and learn how to: