What Is Automation Testing Pyramid?

Practically in all areas of activity, there are certain tricks and secrets which help to improve the work results and make the difficult for understanding facts and terms simpler. Software testing, as the field of the IT sphere, also has its own tricks.

The so-called ‘visualizers’ are often used in software product testing. These are different sort of diagrams, schemes, pictures, and so on. Such assistants promote the strict and clear understanding of the difficult processes which are rather widespread in the IT sphere.

Automated testing is tightly connected with the name of Mike Kohn who represented the automation process of the system and products checking in the form of the pyramid. Designed by Mike pyramid consists of 3 elements. 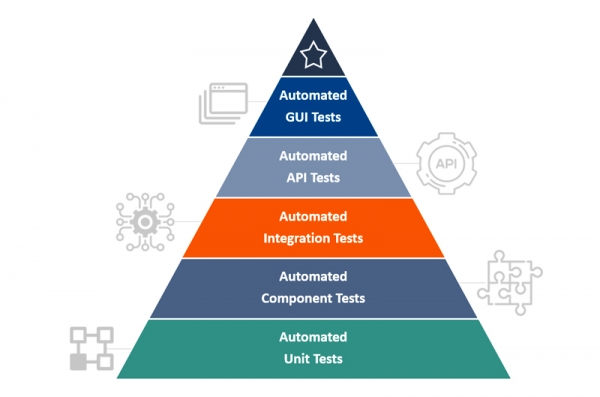 What Are the Layers of the Testing Pyramid?

End-to-end testing is on the very top of the Mike Kohn’s pyramid and module one – the pyramid basement. The top component of the pyramid also includes user interface tests.

The elements of this pyramid are distinguished from each other by the size as they contain the different number of test cases, needed for the one or another testing type execution.

Besides, there is a cloud on the top of the pyramid. Exactly manual testing is represented in the form of the cloud because it is not an inherent and obligatory part of the pyramid.

The represented pyramid is typical for software testing. But there are a lot of its modifications. Everything depends on the type of checking, whether it is mobile testing or application testing.