There are three phases of software testing - alpha, beta, and gamma. They are performed one after another, and together ensure a release of high-quality software.

Alpha testing is an internal checking done by the in-house development or QA team, rarely, by the customer himself. Its main purpose is to discover software bugs that were not found before. At the stage of alpha testing, software behavior is verified under real-life conditions by imitating the end-users’ actions. It enables us to get fast approval from the customer before proceeding to product delivery.

The alpha phase includes the following testing types: smoke, sanity, integration, systems, usability, UI (user interface), acceptance, regression, and functional testing. If an error is detected, then it is immediately addressed to the development team. Alpha testing helps to discover issues missed at the stage of requirement gathering. The alpha release is the software version that has passed alpha testing. The next stage is beta testing.

Beta testing can be called pre-release testing. It can be conducted by a limited number of end-users called beta testers before the official product delivery. The main purpose of beta testing is to verify software compatibility with different software and hardware configurations, types of network connection, and to get the users’ feedback on software usability and functionality.

There are two types of beta testing:

During beta testing, end users detect and report bugs they have found. All the testing activities are performed outside the organization that has developed the product. Beta checking helps to identify the gaps between the stage of requirements gathering and their implementation. The product version that has passed beta testing is called beta release. After the beta phase comes gamma testing.

Gamma testing is the final stage of the testing process conducted before software release. It makes sure that the product is ready for market release according to all the specified requirements. Gamma testing focuses on software security and functionality. But it does not include any in-house QA activities. During gamma testing, the software does not undergo any modifications unless the detected bug is of a high priority and severity.

Only a limited number of users perform gamma testing, and testers do not participate. The checking includes the verification of certain specifications, not the whole product. Feedback received after gamma testing is considered as updates for upcoming software versions. But, because of a limited development cycle, gamma testing is usually skipped. 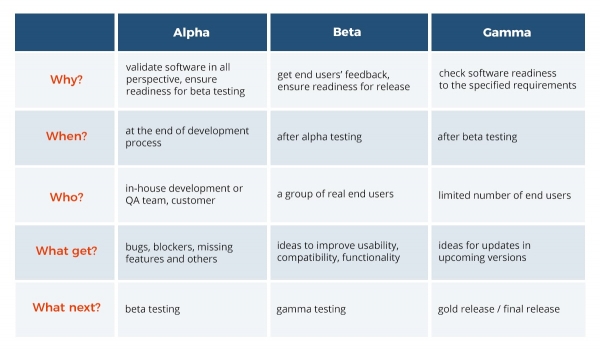 Bonus: software release life cycle also includes the pre-alpha stage that consists of activities done before the QA and testing phase. They are: