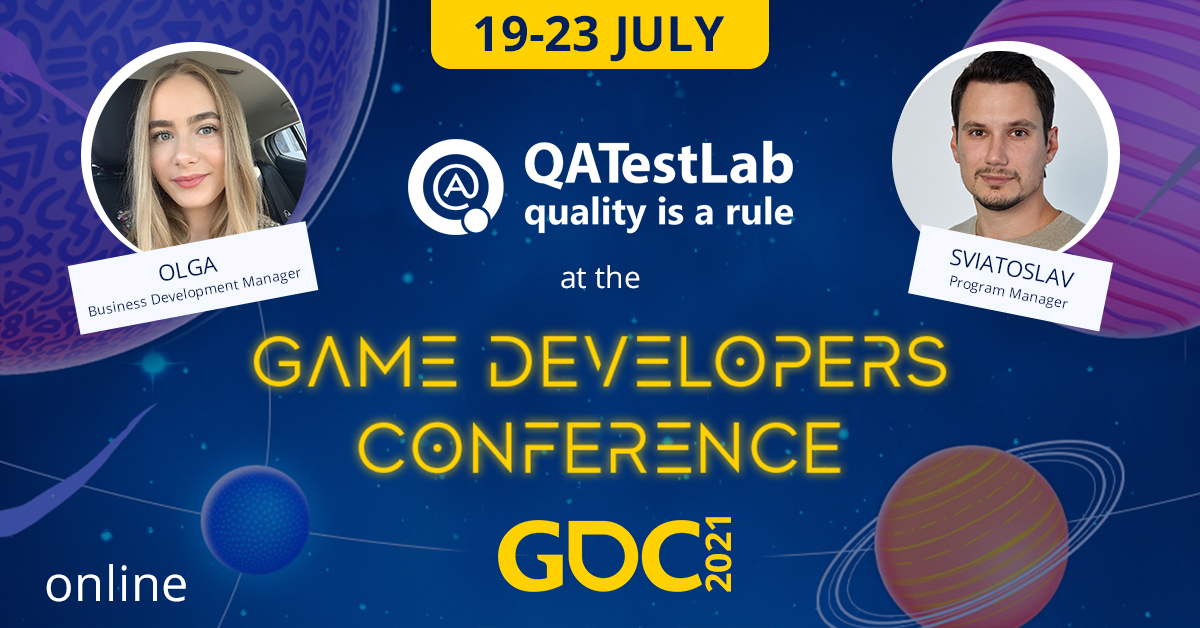 On July 19-23, QATestLab attended GDC (Game Developers Conference) 2021, one of the most important annual events in the game industry, this time held online for the first time.

Although the virtual format was new to both the conference organizers and participants, this year’s GDC retained all of its distinct features and benefits. As always, it remained a platform where game leaders and professionals only starting their way in the industry alike could meet, network, share experience and insights, and inspire each other.

Sviatoslav Mazur, a Program Manager at QATestLab, shares his impression about the conference:

“It was a really large-scale and diverse conference, with participants varying from individual game developers and indie companies from all over the world to the largest and most prominent game corporations. There were lots of events, productive meetings, and in-depth discussions.

The topics ranged from particular game genres and the reasons for their popularity, prominent new releases, and tendencies in the game industry to more philosophical topics, such as the ways global trends and the specifics of modern life influence games, their genres, and mechanics.”

“It was an interesting experience and a great way for all kinds of game-related experts and companies to get in touch. One could say that GDC creates its own subculture; it is a platform for connection and interaction in the game industry.

I particularly enjoyed the networking rooms that provided the best opportunities to communicate with representatives of many game and game-related companies, both old acquaintances and new contacts.”

Of course, the importance of game testing was discussed at GDC too.

Sviatoslav Mazur describes his impressions about the conference participants’ stance on and experience with game QA:

“Everyone realizes the value of testing for the quality of games. Even small indie companies try to pay attention to it, with their developers often performing certain tests, because they understand how crucial QA is in games. But, unfortunately, such an approach may not be enough for thorough testing. This is where independent testing services can be of help.

Larger game companies, on the other hand, often rely on their publishers for QA. The latter tend to engage independent testing providers for comprehensive game QA.”

We wholeheartedly agree with the apparent consensus of the GDC participants on the necessity of game QA. Proper testing is a safeguard of game quality and players’ satisfaction and loyalty. Whether a company performs game testing with their in-house team, uses services of independent testing, or both, thorough game QA is vital.

The QATestLab team was happy to be a part of such a grand game event as GDC this year. We express our gratitude to the conference organizers and contributors. We hope to meet you all again soon at another game-related event.

Before that happens though, please don’t hesitate to contact us anytime if you need professional help with game testing.